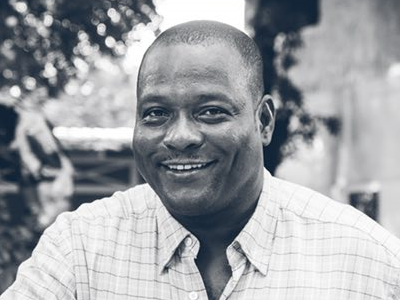 Frantz Zéphirin was born in Cap Haitien, Haiti on December 17, 1968. By his reckoning, he is the 24th of 48 children sired by his architect father (with 19 different women). As a toddler he sat and watched his uncle, the Haitiian painter Antoine Obin, as he worked. By the age of 7, Frantz was filching paint in bottle caps to do his own paintings. Within a year he was selling paintings to the tourists from cruise ships that docked in Le Cap in those days. By age thirteen, lying about his age, he was selling work to galleries.

Eventually he moved to Port-au-Prince and became associated with the Galerie Monnin. His style is unique among the painters of the Northern School. He describes himself as a Historic Animalist. He is entirely self-taught. Unlike many Haitian painters, he usually titles his paintings.

Zéphirin counts among his influences Leonardo daVinci, James Darwin and the Lost Continent of Atlantis. His work is shown internationally. In October 1996 he was awarded the Gold medal in the Third Biennal of Caribbean and Central American Painting sponsored by The Museum of Modern Art of the Dominican Republic. This competition featured 144 artists from 37 countries in the region. He was one of 5 Haitians to be included in the V Biennal in Cuenca, Ecuador in 1996. Two of his paintings are featured in the wonderful show Sacred Arts of Haitian Vodou that toured the USA in 1997 and 1998. One of his paintings illustrates the cover of The Immaculate Invasion by Bob Shacochis (New York: Viking, 1999).

Following the 2010 earthquake, Zéphirin moved to Key West, Florida for several years. Having returned to Haiti, he lives and works in his vodou temple, The Temple of the Seven Virgins, high on a mountain overlooking Mariani, outside of Port-au-Prince.

The 3 Faces of Aristide

Drot, Jean-Marie. An Encounter between Two Worlds as Seen by Haiti's Artists. 1994.