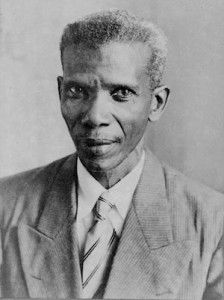 Philomé Obin, brother of Seneque Obin, was born in 1892 in Bas Limbe, Haiti into a family of seven children. His father was a tailor. Obin worked at many successive jobs during his adult life including coffee merchant, barber, and bookkeeper, all while painting religious subjects for local churches and historical scenes for Masonic temples on the side.

He was the first of the untrained artists to approach the Centre d'Art, when in 1944 he sent a painting depicting Franklin D. Roosevelt to DeWitt Peters and was immediately invited to join the Centre. He subsequently founded and directed the Branche Capois de Centre d'Art in his home city of Cap-Haitien, where he grew to become universally considered the father of the 'Cap-Haitien style' of painting. Seneque and many of the two brothers' sons and daughters eventually took up painting at Philome's instigation, resulting in an extraordinarily widespread and impressive body of work reflecting the creations of many subsequent generations, a vibrant family legacy that continues to this day.

Philomé Obin died August 6, 1986. His contributions to the Mural project in the Episcopal Cathedral of Sainte Trinite in Port-au-Prince were The Crucifixion and The Last Supper. His work is included in the permanent collections of the Museum of Modern Art in New York, Detroit Institute of Arts, the Milwaukee Museum of Art, the Musee d'Art Haitien du College Saint Pierre in Port-au-Prince, the Figge Art Museum in Iowa, the Wadsworth Atheneum in Hartford, Connecticut, the Yale University Art Gallery and Ramapo College in Mahwah, New Jersey.