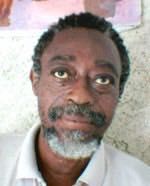 Wilfrid Louis was born in Port-au-Prince on April 17, 1943, and studied at l'Academie des Beaux-Arts from 1963 to 1970. There he learned casting, drawing and ceramics. Regarded as one of Haiti's finest artists, Louis uses a palette knife to blend only the three primary colors into subtly different shades. He founded his own atelier, La Maloulou, and his prior students include Reynald Joseph.

John Ripton, adjunct professor of Caribbean history at Rutgers University, says Louis wants to distinguish his art from primitivism and that the artist's inspiration 'comes from the people, from the experience of life on the streets, the joy the sadness, the wisdom of a poverty-stricken people which, in spite of everything, retains hope in the future.'