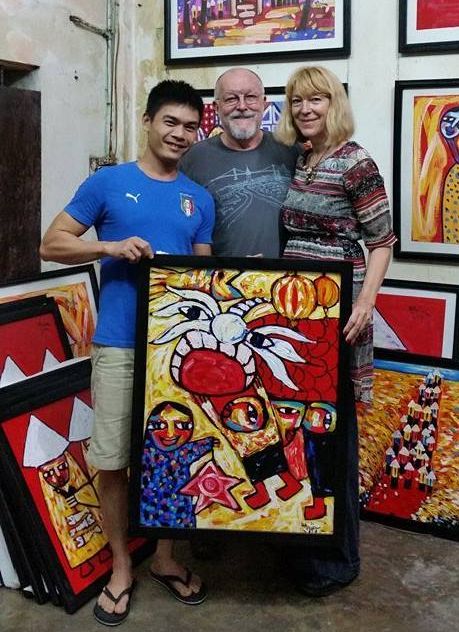 [Rebecca and Patrick Jamieson at the artist's Hoi An gallery.]

Tran Huu Duong was born in Da Nang, Vietnam in 1967. He graduated from Hoi Chi Minh University of Fine Arts. He has been exhibiting since at least 1989.

In 1999, Duong won the Young Artist Award of the Vietnam Association of Arts and Literature, and received another award from that association in 2001.

Duong opened a studio/gallery in the old town area of Hoi An, Vietnam, in 2005. He also teaches at the Culture-Art School in Da Nang, and is very involved in the local arts community. He is a Member of the Association of Fine Arts of Vietnam, the Association of Fine Arts of Quang Nam, and the Hoi An Fine Art Club. He has built an international reputation, and has exclusive contracts with galleries on five continents.

We were introduced to the work of Tran Huu Duong when we visited his Hoi An gallery in August 2014.